Alessandro Alessandroni, death of the whistle 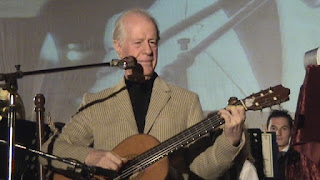 Alessandro Alessandroni died on March 26 (2017) at 92 years. Composer, conductor and multi-instrumentalist he will be remembered for his skills as a guitarist and whistler in many famous Italian and international cinema soundtracks

Alessandroni began to play various instruments such as guitar, mandolin, piano, flute and sax like a self-taught.

After graduating from the conservatory of Rome he began to work with the “Fonolux” society as member of orchestra for film music. In that period he met Nino Rota who discovers his talent as a whistler. He was nicknamed "whistle" (“fischio”) by director Federico Fellini.

Its crisp, clean whistle has been appreciated by many Italian composers of film.

In 1964 Ennio Morricone calls him to make a "fischiatina" (“a little whisper”) for a unknown western movie by Sergio Leone and this song was the theme of the titles of "A Fistful of Dollars". On this music Alessandroni also played  an electric guitar using a Fender Stratocaster.

In those years, Ennio Morricone worked with the "poor" timbres using traditional folk sounds like the whistle, acoustic guitar, the ocarina and the harp.

In 1965, "A Fistful of Dollars" comes out in several countries (Germany, France, Spain and Japan) with great success and generated a new genre: the "spaghetti western".

The "A Fistful of Dollars" great success has been due also to the  soundtrack and Sergio Leone for his next film used the same formula for the music: Morricone / Alessandroni.

In 1965 he released "For a Few Dollars More" with Clint Eastwood, Lee Van Cleef and Gianmaria Volontè.

In 1966 Sergio Leone with Clint Eastwood, Lee Van Cleef and Eli Wallach  carried out one of his masterpieces "The Good, the Bad and the Ugly" where Alessandroni  whistled in various themes of the soundtrack.

But Alessandroni was also performed as a singer. In the early years of his career he worked with the  "2 + 2" by Nora Orlandi choir.

In 1962 he founded "I Cantori Moderni", a vocal group which included his wife Giulia De Mutiis, and the soprano Edda Dell'Orso.

Edda Dell'Orso’s voice was used by Morricone as a singer of some of his most famous themes (for example "Once Upon A Time in the West" and "A Fistful of Dynamite").

In 1968 Alessandroni and “I Cantori Moderni” played in the soundtrack of "Once Upon a Time in the West" where Edda Dell'Orso sang the main theme.

In 1970 Alessandroni played the theme of "Trinity" by Franco Micalizzi and 1972 and collaborated again with Ennio Morricone  in a Sergio Leone movie : "A Fistful of Dynamite".

Even the theme of "A Fistful of Dynamite" was performed by Edda Dell'Orso with Alessandroni in a short vocal pattern (“Scion Scion”) and whistled in some internal songs of the soundtrack.

Ennio Morricone also called him to whistle out of the western movie, as in "Peur sur la ville" (Henri Verneuil, 1975) and for the comedy "Un Sacco Bello" (Carlo Verdone, 1980).

In the sixties Ennio Morricone composed westerns soundtracks  by other main directors like Sergio Sollima (“La Resa dei Conti” aka “The Big Gundown”, 1966 and “Faccia a Faccia”, 1967) and Sergio Corbucci (“Il Mercenario” aka “The Mercenary” 1968, “Il Grande Silenzio” aka “The Great Silence”, 1968 and “Vamos A Matar Companeros”, 1970).

In 1968 he sang the hit song "Mah-mah-nà nà" by Piero Umiliani for the “mondo movie” "Sweden, Heaven and Hell" ( "Svezia Inferno e Paradiso" by Luigi Scattini). In these years Alessandroni collaborated with many other Italian composers such as Francesco De Masi, Armando Trovajoli and Piero Piccioni.

In his career Alessandroni and “I Cantori Moderni” also collaborated on many pop music recordings  as a vocal group and Alessandro Alessandroni was one of the first"sitar"  players  in Italy. 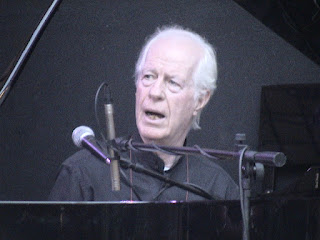 In the 60's the main influences of italian film music composers were western classical music, jazz and its derivatives and “popular” music.

Classical music was taught in conservatories, structures able to provide the necessary recognition to begin a musical career.

The Conservatory provided the basis of instrumental technique, composition and arrangement. Alessandroni, stating as self-taught, graduated  in the Santa Cecilia Conservatory in Rome and this background proved valued both for his work both for orchestral player and as a composer.

The jazz music and some genre connected to it, such as the bossa nova, belonged to the repertoire of dance and radio bands.

In the 50's jazz influenced a lot of entertainment music and many musicians while attending the conservatory had fun playing it in  nightclubs.

In the 60's, the prevailing popular music in Italy were the "rock and roll" and "rhythm and blues". In addition to the anglo-american many artists as Rita Pavone, Gianni Morandi, Edoardo Vianello, Mina, Adriano Celentano became very popular  as young "screamers" (“Urlatori”)

Many composers of film music, including Morricone, wrote songs and made arrangements for these singers.  Alessandroni and the “Cantori Moderni” realized several collaborations with pop singers.

"For A Fistful Of Dollars" was a film made with few resources and destined to be “popular” so Morricone thought of using "poor" sounds using  folk tradition timbres as a whistle, the bell, the whip, the ocarina and the harp . The whistle was not even considered a real musical instrument.

When Morricone asked to Alessandroni to play guitar on the theme of "For A Fistful Of Dollars" he  used a Fender Stratocaster. In the early 60's this kind of guitar made it popular by “The Shadows”’ guitarist Hank B. Marvin. In 1960 “The Shadows” recorded a western-inspired song "Apache", in which the theme was played by Marvin who effected his guitar with a “spring” reverb.

The bright sound of the Fender guitars has been used  in "country & western" and it was  becoming a characteristic of the new American folk sound.  The song "Apache" became an international hit and  very popular in Italy.

Ennio Morricone in the orchestration of the theme of "For A Fistful Of Dollars" used the Fender guitar sound  by Alessandroni as a direct imaginary sound reference of  the “western” music.

The Alessandroni’s   guitar technique derived directly from European classical music. He used the fingers of his right hand to pluck the strings instead of a plectrum

Alessandroni used the whistle like a real instrument. His whistle was sharp and intoned he could control the vibrato and ligatures as a flute.

Morricone has been able to create a new sound stereotypical imagery connected the western from the fusion of sound elements seemingly unrelated and distant from the 800 traditional American music. Alessandroni’s whistle and the sound "twang" of his Fender were two of the important elements of this sound mixture. I “Cantori ModernI” offered their vocalism to strengthen the epic vision of Morricone's “western” sound. Their contribution was mainly choral but also implemented by the work of individual elements of the group as Edda Dell'Orso.

Ennio Morricone also used the onomatopoeic sounds made by the voices chanting rhythmic or thematic obliged accents. These kind of sonorities  are already listenable on the theme of "For A Fistful Of Dollars". They are Morricone’s compositional aesthetics elements that we find in all of his work in the western soundtrack, in which the role of Alessandroni has been decisive.

With the success of "For A Fistful Of Dollars" the Italian cinema began to produce a large amount of western film intended  for the export and for the domestic market. It was a golden age of Italian cinema which produced important films in other genres.

We can take into consideration  some soundtracks written by Alessandroni starting from the “western” genre. In 1974 he composed the music of "The Crazy Bunch" (“Di Tresette Ce N'è Uno, Tutti Gli Altri Son Nessuno”by Giuliano Carmineo).

The title theme using certain elements that had already been employed by Morricone in westerns: the classical guitar arpeggios, the little inserts the electric guitar, the main theme performed by the whistle. Even the use of horns, flutes and trumpets, the drums input in the crescendo, followed by the mandolin and the running time, the minor chords that harmonize the melody are typical of the sound cocktail identified by Morricone, and of which Alessandroni he was the main protagonist.

Stylistically it is a structured use of a series of sounds and predefined shapes in a sort of “virtual folk western” developed by Ennio Morricone with the substantial aid of “Cantori Moderni”.

In soundtracks created for different genres of movies he leaves the pattern learned by the collaborations with Morricone.

The Alessandroni’s style took other directions inside the sound of "Italian soundtracks" of those years, but he did not hesitate to use different sound mixes. Alessandroni used reminiscent sounds of Nino Rota in Fellini's films in the theme of the black comedy "The Mad Butcher" ( "Lo Strangolatore di Vienna" by Guido Zurli, 1971).

In the themes of "Lady Frankenstein" (by Mel Welles and Aureliano Luppi, 1971), Alessandroni exploited his classical skills creating a soundtrack between the experimental atmospheres and the late romantic orchestral themes.

Alessandroni composed also  a lot of music for sound libraries which has been used by television and documentary filmmakers.

These compositions often crossing through  many musical genres and even touching trial moments. They are characterized in thematic collections and often allowed great freedom of expression. The "Industriale" (“Industrial”) album, recorded in 1976, is a collection of evocative compositions on factory scenes. These compositions utilize a noise language and cyclic rhythmic-melodic patterns. It is an experimental album in which the elements of the industrial rock blend with contemporary classical music.

Alessandroni also played as a pianist occasionally performing live jazz in clubs at various periods of his life. Jazz then played a considerable influence on his musical culture. This background is evident in many of his sound libraries. Alessandroni uses formal schemes of funky and jazz in the library of "Inchiesta" (“Inquiry”) sound (1997)

Alessandro Alessandroni was one of the musicians and composers who have contributed to the great success of the Italian film music in the world.

His ability to play several instruments allowed him to became a main player in the orchestras of the great composers and they have used him to make original and distinctive sound of Italian movies.

His work contributed to making the sound of the original and recognizable “Italian soundtrack”. A big loss to all music.

Eclectic Productions
ECLECTIC records was founded in 1996 by Alex Marenga aka AMPTEK, DR.LOPS and Sandro Grasselli. ECLECTIC published some vynils e.p. and cds of many electronic italians and european artists. In 2000 ECLECTIC also uses name in ECLECTIC Productions and his music was co-produced with other companies like NOSHAME FILMS, and in digital distribution with CDBABY.COM network.